COVID-19: Which vaccines are people getting? - Truveta

As we shared in our latest Truveta Platform insights last week, the COVID-19 Omicron variant has highlighted the positive impact of vaccinations and boosters in preventing hospitalization.

Thus, we wanted to shed light on the percentage of people who are fully vaccinated and boosted and the sequence of vaccines they have received. We investigated a subset of the de-identified data in the Truveta Platform, which included nearly four million people who had at least one COVID-19 vaccination.

If you haven’t gotten vaccinated or boosted yet, we strongly encourage you to do so today. And if you’re curious about the percentages of people who received the same vaccine sequence as you, you can see the trends below.

Boosted was defined as 2 mRNA vaccines (even if mixed and matched among Pfizer and Moderna) and 1 additional vaccine or 1 Janssen vaccine and any additional vaccine. Only 22.5% of people who received at least one shot were boosted.

Fifty-five percent of our study population received a first dose of the Pfizer vaccine. 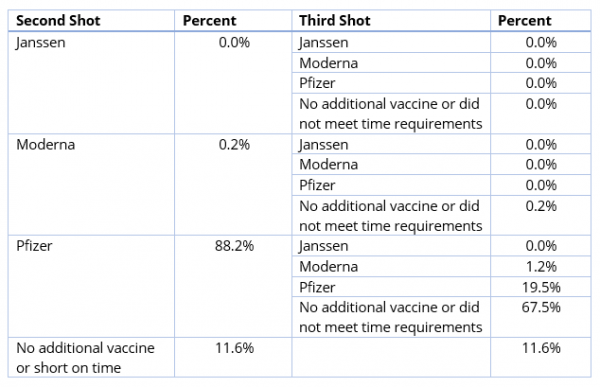 Thirty-eight percent of our study population received a first dose of the Moderna vaccine. 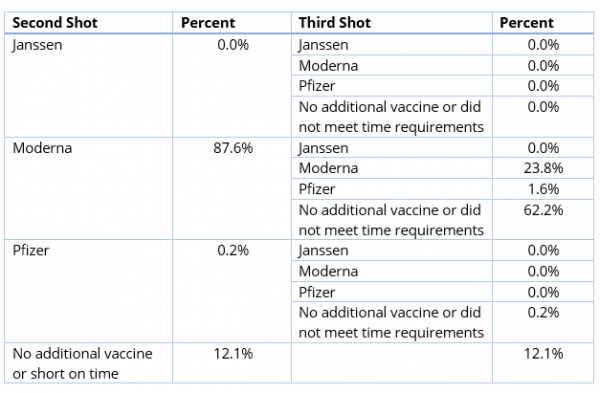 Seven percent of our study population received a first dose of the Jansen vaccine. Second shot is defined as a booster in this case, as a first shot of Janssen is considered fully vaccinated.

The ability to mix and match vaccines has been an important consideration over the past year. Seeing which vaccines people received for a variety of reasons could be informative for future vaccination and booster efforts.

Did you mix and match vaccines? Head to LinkedIn and let us know.