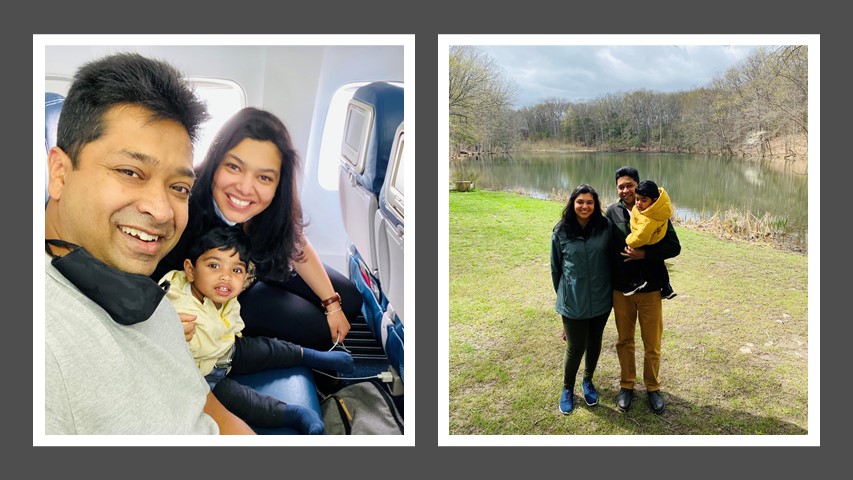 We continue our Meet the MDs series with Harshita Ravishankar, who recently joined our Partner team as the Director of Partner Solutions and Success. Harshita brings a depth of experience across not only patient care, but research, finance, and business development to her new role. Located in New York City (where her 2-year-old keeps her busy exploring local parks in her free time), we recently chatted over a video call to learn more about what motivated her to become a doctor, and the interesting career path she’s taken since moving to the United States and pursuing her passion for creating a better system of patient care.

Growing up, Harshita closely watched her grandfather who was a physician in a small village in India. She would hang around and play in the office as a little girl, observing him with his patients. She remembers him spending a long time talking with each patient, asking him impatiently, “Are you done yet? Let’s go!” He knew so much about each of the people he treated, always asking about their families and what was going on in their lives. She saw how much comfort this brought to people, to truly feel cared for, and how this was its own skill. She learned that being a doctor meant more than simply tending to a person’s symptoms.

As a teenager, Harshita lost that same grandfather as well as her grandmother to cancer. Both losses felt sudden, and they seemed to be sick out of nowhere. Their cancers went undetected until it was too late, and they both lost their battles only months after their official diagnosis. It was at this point that she knew for certain she wanted to pursue a career in medicine. She wanted to catch these symptoms earlier for others, before it was too late.

Harshita started medical school in Bangalore, India when she was just 17 years old. After graduating, she practiced as an ER physician. It quickly became clear there were challenges being in the physician role, which is laser-focused on the patient path. She was always thinking about the bigger picture. She wanted to get to the bottom of why patient wait times at her hospital kept increasing and started thinking about what she could learn about how the whole system worked and get to the root cause of problems like these. After about four and half years in the ER, Harshita knew it was time for a change and moved to New York City to pursue a path toward a more holistic role in hospital strategy and operations.

Harshita’s first role in her new city was as a research manager in neurochemistry at Nathan Kline Institute, focused on improving cognitive functions for patients with schizophrenia. This was much different work than she was used to – and she loved it. She led clinical trials. She presented at an international conference. With a rapidly expanding skillset, she decided she wanted to keep learning. She got into New York University and received a master’s degree in Public Health Administration, specializing in Finance. She wanted to fully understand hospital revenue systems, why certain procedures cost what they do, where these costs come from – things she had no visibility into as a physician.

Over time, her focus started to shift more towards business strategy. Eventually she landed a role managing mergers and acquisitions for a hospital. Now officially on the other side of the table, Harshita was the one assessing the providers.

As she made the transition from ER physician, to research, to hospital leadership, Harshita initially thought she would miss the one-on-one patient interaction. However, she has found it to be even more rewarding to learn about and impact how the entire care system functions. She has continued to seek out roles with high levels of influence, including leading the launch of a physician directory mobile app, working at DaVita Kidney Care leading growth and expansion of home dialysis, leading a large clinical data team at Flatiron Health to create and assess clinical data for real world data-based research, and managing life sciences partnerships at ConcertAI where she advised large pharmaceutical companies.

“There is so much data, and people are not utilizing it”

When a previous manager put her in contact with the Chief Medical Officer at Truveta, Harshita knew right away this was something different. The way that these large health systems had come together was something she had never seen before, and she could immediately see the possibilities. As a former physician, she is intimately aware of how much time is spent documenting and recording patient data that is not being used. This is data that can serve a bigger purpose.

“We want data to be optimized in all parts of our lives. When we go to a coffee shop or a restaurant, we use Yelp and check reviews. We want to make sure it’s the best quality and priced right. Why don’t we have this for our health? As a consumer and a physician, I would want this valuable data to see what novel therapies work best, which medicines and procedures are most effective. Especially in the rare disease space – like what happened with my grandparents who had very rare types of cancer. We need to be able to better understand disease at a genomic and individual level.”

Now in her new role at Truveta, Harshita is focused on working directly with life science customers as a true collaborative partner toward the vision of saving lives with data. She’s eager to show others how they can use our data platform to fulfill their research goals, and to help Truveta data become the industry standard.