Truveta Insights: Do emergency department visits for asthma increase when the air quality index is high?

In recent years, the Northwest has experienced record-breaking air quality index (AQI) values from forest fires along the west coast of Canada and the United States. Dramatic headlines have highlighted the potentially hazardous connection between the fires, air quality, and our health. At the time some reports highlighted that breathing Seattle air was as bad as smoking half a pack of cigarettes; but, did this poor air quality correlate with increases in respiratory emergencies?

Researchers have been studying associations between the air that we breathe and its effects on our health for decades; literature has shown evidence of links between increased fine particulate matter and death, as well as, how seasonality and geography impact air quality and respiratory health. The CDC highlights the linkage between asthma, air pollution and worsening health outcomes.

Many of us have directly experienced the detrimental effects of increased poor air quality in the Northwest in previous years. The Truveta research team was curious if these periods of poor AQI correlated with increased Emergency Department (ED) visits for people experiencing first-time asthma emergencies.

To answer this question, we combined a subset of Truveta data with publicly available AQI data provided by the United States Environmental Protection Agency.

AQI is a measure of air pollution and takes into account five major pollutants (ground-level ozone, particle pollution [PM2.5 and M10], carbon monoxide, sulfur dioxide, and nitrogen dioxide). AQI values range from 0 to 500; values over 100 are considered unhealthy for some groups. We calculated the daily mean AQI by state. At the time of this posting, data were available through June 30, 2021.

We studied a cohort of people who had their first asthma diagnosis between January 1, 2018 and June 30, 2021 in Oregon and Washington. We then looked at the subset of these encounters that were visits to an ED. We examined a centered rolling 7-day average of the visits.

When looking at the entire period, we did not see correlations between ED visits and AQI. However, as we were interested in periods of potentially dangerous air quality, we looked closer into two time periods which had AQI values over 100. For both Washington and Oregon, this occurred in August 2018 and September 2020.

When looking at the periods where AQI peaked, we also see a delayed peak in ED Visits for asthma. These delays range between 1 and 3 days following the AQI peaks. 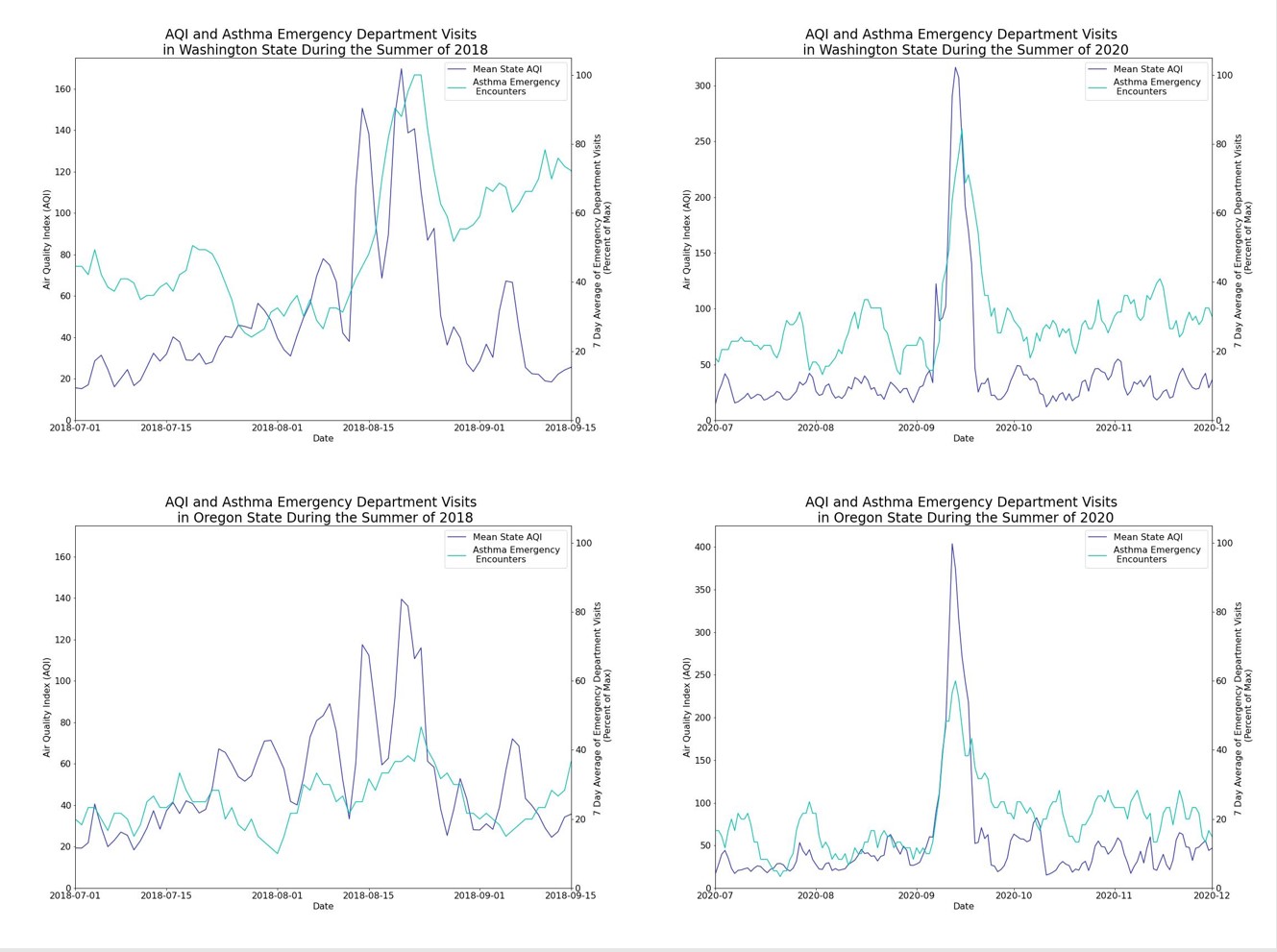 These data highlight a potential connection between high AQI and asthma ED visits. Our results, along with previous literature, indicate that additional variables are also at play which impact initial Asthma ED visits. Thus, anomaly detection and causal inference methods would be useful for further research into the specifics of how AQI and other variables affect asthma ED admissions.

These are preliminary research findings and not peer reviewed. Data are constantly changing and updating. These findings are consistent with data from April 22, 2022.