Peripheral artery disease (PAD) is a common disease that causes narrowing of the arteries in the extremities. The lifetime risk for Americans varies between 19-30% [1]. Many studies have shown that PAD disproportionately affects both Black or African American (henceforth referred to as Black) and Hispanic or Latino individuals; further, these groups experience worse outcomes (including amputation) compared to white and non-Hispanic or Latino individuals [1-4].

As part of PAD Awareness Month, we investigated disparities in the frequency of common procedures used to treat PAD, known as endovascular (or minimally invasive) revascularization, and the associated outcomes. Revascularization is used to open the artery and improve blood flow to the areas beyond the narrowed artery. As part of this procedure, a small balloon is inflated within the artery to open the narrowed area. Alternatively, a stent, or small metal scaffold device, may also be placed to help keep the artery open for longer periods of time. Newer designs of both balloons and stents include a drug coating to prevent the re-narrowing of the artery once the balloon is removed or following the placement of the stent (called restenosis).

Due to the small sample sizes observed in previous literature and the timeliness of Truveta data, we wanted to learn more about the PAD population, such as who received revascularization procedures, whether disparities exist among the patients who received drug-coated vs. bare stents and balloons, and whether there were differences in adverse outcomes across the different technologies used.

Using a subset of Truveta data, we identified people diagnosed with PAD (Table 1). The diagnostic codes used to identify PAD patients are provided in the supplement. The population resulted in over 455,000 individuals with PAD. 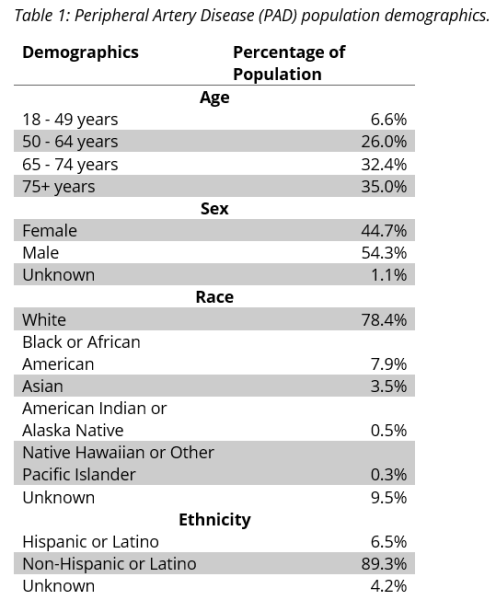 We asked two questions of the PAD population:

Of those diagnosed with PAD, 2.4% (nearly 11,000) underwent a revascularization procedure. The difference across demographic groups is shown in Table 2. 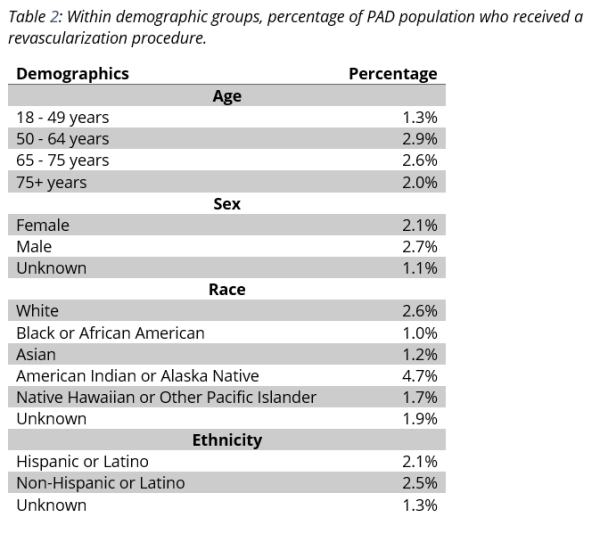 Differences in treatments across demographic groups

Figure 1: Percentage of revascularization procedures within each age group by device type.

Females diagnosed with PAD were less likely to receive a revascularization procedure than males diagnosed with PAD (2.1% vs 2.7%, Table 2). However, of individuals who had a revascularization procedure, females received a drug-eluting stent (21.6%) or a drug-coated balloon angioplasty (11.2%) at similar rates to males (20.7% and 10.5%, respectively, Figure 2). The unknowns in this report either indicate the value was not included in the individual’s electronic health record or that it was excluded from the data to protect an individual’s identity as a part of Truveta’s commitment to privacy [9].

Figure 2: Percentage of revascularization procedures among males and females by device type.

Black (1.0%) and Asian (1.2%) patients diagnosed with PAD were less likely to receive any revascularization procedure compared to white patients (2.6%) diagnosed with PAD (Table 2). American Indian or Alaska Native patients were more likely to receive a revascularization procedure than white patients (4.7% vs 2.6%). A higher percentage of all non-white race groups who received a revascularization procedure received a bare device compared to white individuals (Figure 3). Native Hawaiian or Other Pacific Islander and Black individuals received bare devices at the highest rates. Again, the unknowns in this report either indicate the value was not included in the individual’s electronic health record or that it was excluded from the data to protect an individual’s identity as a part of Truveta’s commitment to privacy [9].

Figure 3: Percentage of revascularization procedures within each race group by device type.

Figure 4: Percentage of revascularization procedures within each ethnicity group by device type.

Figure 5 shows the percentage of the population who experienced adverse outcomes by revascularization type.

Figure 5: Percentage of population who had one of three adverse outcomes following a revascularization procedure.

Overall, 31.7% of people who had a revascularization procedure were re-hospitalized within 30 days of the procedure. This occurred most frequently for patients who were initially treated with bare balloons (41.9%).

Based upon prior studies [2, 3, 4] showing disparities in treatment and outcomes in PAD, we expected to find that Black and Hispanic or Latino individuals underwent revascularization at lower rates than whites. These expectations were supported by the results presented here for rates of procedures for Black and Asian patients. They also were seen for Hispanic or Latino patients when compared with non-Hispanic or Latino patients. American Indians or Alaska Native patients were unexpectedly more likely to have undergone revascularization procedures than white patients. This result should be interpreted with caution, as no methods to compare the population in this study to the US national population was conducted in this study, and a limited sample size for American Indians or Alaska Native patients may affect these results.

Published literature has indicated that drug-coated devices have improved outcomes when compared with non-drug coated alternatives [10-14]. Additionally, race was found to be a larger predictor of revascularization or amputation than insurance or socioeconomic status [2]. With that in mind, we expected Black patients and other historically marginalized racial groups to be less likely to receive superior outcome endovascular devices such as a drug-eluting stent and drug-coated balloon. This was true of Black patients with drug-eluting stents, but not drug-coated balloons. Other historically marginalized racial groups did not show this trend. Hispanic or Latino patients also received bare metal stents and bare balloons at higher rates compared with the non-Hispanic or Latino patient group.

Finally, and most importantly, this analysis demonstrated amputation risks as higher for patients initially treated with bare metal stents and bare balloons compared to drug-coated devices. One-year repeat revascularization rates were lowest for drug eluting stents and similar for other devices. Interestingly, this benefit of drug-eluting devices was not seen in 30-day all-cause re-admission rates.

As with any analysis, this analysis has limitations. First, we looked at raw data and did not adjust for comorbidities such as diabetes, which have been shown to influence outcomes and are more prevalent in certain populations. Second, while this is a large sample, it does not include all patients in the US; there is a potential for sampling bias where certain groups may be over- or underrepresented (e.g., certain rural regions). Also, outcomes in this study were not directly linked to the revascularization procedure; therefore, we can’t say if an amputation, hospitalization, or subsequent revascularization following a procedure was directly related to the initial revascularization or a different root cause. Finally, this analysis did not include underlying socioeconomic measures, such as income or housing instability, which have been shown to influence a variety of medical outcomes.

In the future, we plan to build upon this analysis by exploring certain demographics like age in greater detail, adjusting for comorbidities, and incorporating social determinants of health (SDOH) data. Additionally, adding more device-level data, such as price, in combination with the SDOH data would be interesting to further understand the disparities in device type and outcome.

These are preliminary research findings and not peer reviewed. Data are constantly changing and updating. These findings are consistent with data from August 24, 2022. 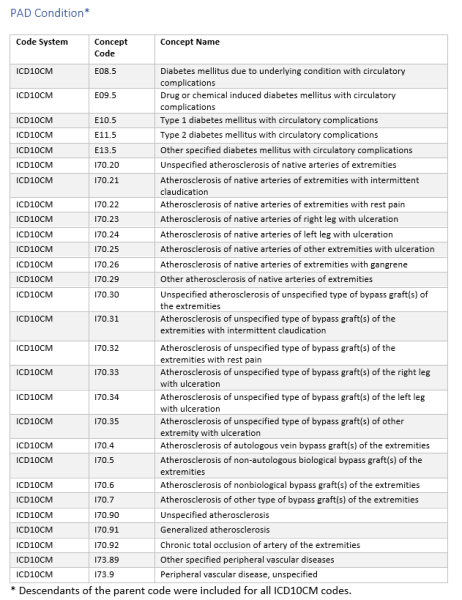 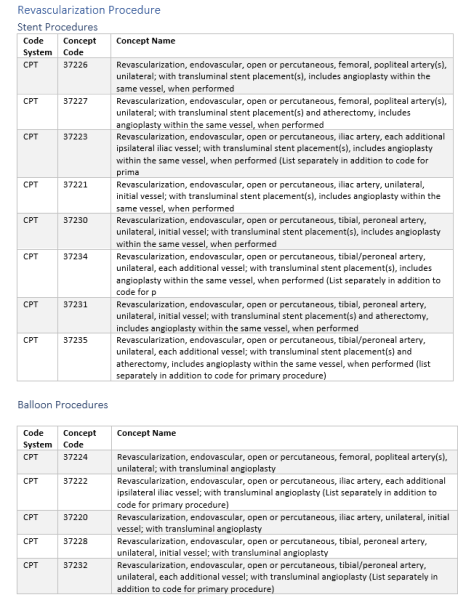 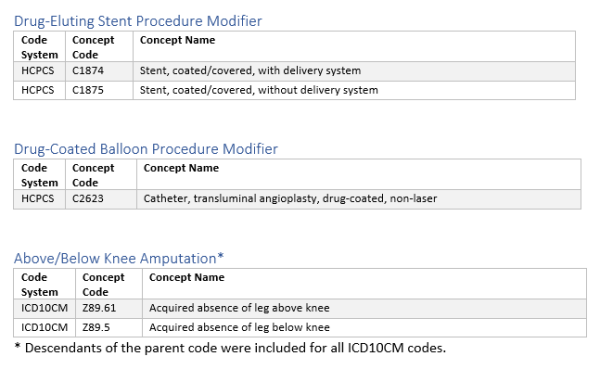 Truveta is a collective of US health systems with a shared vision of saving lives with data. Through partnerships with 24 innovative health system members, Truveta offers innovative solutions to enable researchers find cures faster, empower every clinician to be an expert, and help families make the most informed decisions about their care. Truveta’s data is licensed for healthcare research, not targeted advertising. To learn more, follow us on LinkedIn and Twitter, and sign up for our newsletter.