In honor of Veterans Day, the spotlight this week is on Jose Camilo, a software engineer, and a US Army veteran. We spoke to Jose about his move to the United States, learning English, learning to code, and why he joined Truveta.

How did you find Truveta?

I was working as a software engineer for two years. It was going well, but the work was limited. I wasn’t working with all the technology available to software engineers nowadays. I wanted to learn more and discover more, and so I looked into a role change. I reached out to Jack Ma, the Principal Engineering Manager, on Twitter, and we scheduled an interview. 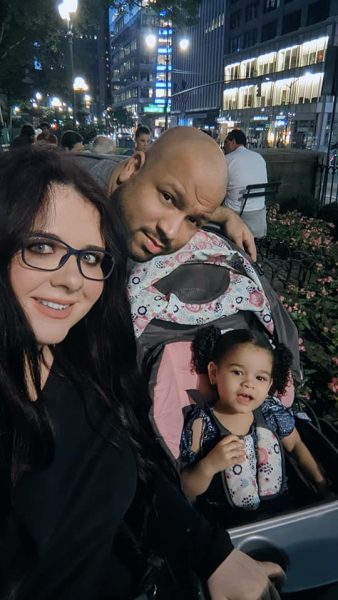 Jose Camilo with his wife and daughter.

What did you want to do when you were young?

I was completely into music. Back in the Dominican Republic I was already playing in bands. I played merengue, bachata, and pop ballads. I was trying to make my living off music. The only thing that got me into technology was the fact that I wanted to produce music. When I came to the US, I didn’t have any music connections, I didn’t have people to jam with, or friends in the area. I had to work here.

Do you still play?

It’s been a while. I had to give up on that dream, temporarily. Maybe I’ll pick it up again, but right now I am focusing on becoming a better software engineer. I have a keyboard. I tried the bass, the clarinet, but the keyboard was my main instrument. I used to play for a lot of different bands.

How did you become a software engineer?

I was the first to go to college in my family, I had to figure that out for myself. I didn’t have people who knew the system. I had to figure it out because music wasn’t in the picture anymore. Not knowing about the system, without any support, it all became expensive. My mother had to cosign my school loans, and I couldn’t continue. I worked until I decided to join the US Army.

I joined the military in 2016. I was deployed to Korea and I decided to start my schooling while deployed. I always looked into technology, but any time I looked at job postings for software engineering, the skills listed were overwhelming. Many times, I thought, “I will never be able to learn all of this for my first job.” I started working on an associate degree in Liberal Arts when I was active in the Army. Once I left, in 2017, I joined the Army Reserve and decided to go to school full-time. I finished my degree in Liberal Arts and proceeded to get another associate degree in Business. I was using the GI Bill from the military, so I didn’t want to waste any time. I was trying to take as many classes as possible. I then finished my bachelor’s two years after completing my business degree.

I had a lot of interests, I went into business administration because I had an interest in real estate, investments, and finance. I also looked into civil and mechanical engineering, but I was not the best at math. I always really liked technology and software development, so despite being overwhelmed by the amount of skills listed in job postings, I decided to go with my heart. I went for a bachelor’s in computer information systems. I went to the more technical side, rather than scientific. My senior year, I worked at an international company as an application support engineer. Then, I worked at a bank before joining Truveta.

Truveta’s vision is saving lives with data – what does that mean to you?

It gives my work purpose. Previously, I was on a small engineering team, creating tools for the network team. The work became somewhat abstract to me as sometimes, I wouldn’t know how the tools I was creating were being used. Now, I can say, “I helped build this system that provides clinical researchers with data to help accelerate diagnosis and treatment for patients all over the US.” It’s more powerful, more purposeful. I can feel like my job is not just writing code, I am working on something rewarding. It benefits people. It may benefit me in the future.

Jose Camilo with his daughter.

What helped you the most as you learned a new language, and how to code?

I joined a community of military veterans wanting to go into tech (Operation Code), and I was in a few Slack channels. I still had to figure out a lot for myself, but there were people in the community who answered my questions, especially about job interviews. I didn’t realize there were things like coding bootcamps until my senior year. A lot of what I learned was self-taught. By the time I got to certain topics in school, I already knew the concepts. The community provided the most helpful resources.

What advice would you give yourself at age 19, when you first left the Dominican Republic?

When I came to the US, I didn’t know the system and neither did my family. I had a lot to figure out and it was overwhelming. To add to that, I didn’t know English, which made things worse. A piece of advice I would give myself at 19, is to slow down and take time to learn. Not in school, but to learn how things work before jumping in. But, whatever happens, keep working on something.